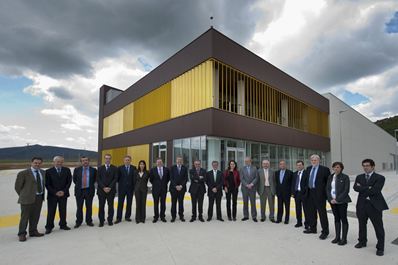 At noon today the CENER-CIEMAT Foundation meeting was held, presided over by the Minister for Innovation, Business and Employment of the Government of Navarra, Jose Mª Roig, and whose Vice-president is the Secretary of State for Investigation, Felipe Petriz.

Representatives and senior executives from the Ministry of Science and Innovation, the Ministry of Industry, the Government of Navarre and Ciemat form part of the Board of Trustees of the Foundation constituted in the year 2000 and which gave rise to the National Renewable Energies Centre.

The President of the Government of Navarre, Miguel Sanz joined the meeting of the Trustees at the end, which was held this time at the CENER second-generation Biofuels centre, located in the industrial estate of Aoiz, and which has entered recently into operation. Later all those present toured the facilities of the centre which is to become an international reference for the sector.

The project will mean a total investment of 20 million Euros. In this first stage 12 million Euros has been inverted in the construction of the bio-mass pre-treatment unit, the offices and the laboratories. The next step will be the construction during 2011 of the gasification units and the biochemical processes, investing 8 million Euros, to complete the overall project.

The Second Generation Biofuels Centre (CB2G) is located in the town of Aoiz in Navarra and is a semi-industrial test plant on a pilot scale able to develop 2nd generation biofuels from raw materials which are non-competitive with the food industry (especially ligno-cellulose material such as forest and herbaceous waste) through different routes: thermochemistry, biochemistry and/or enzymatics, as well as the application of biorefinery concepts.

The project has been developed by the Government of Navarre (Plan Navarre 2012) and the Ministry of Science and Innovation. CENER, the owner of the centre, shares the scientific and technical management with CIEMAT (Research Centre for Energy, Environment and Technology).

The CB2G has been designed with the primary targets of being able to process an ample range of biomasses (Herbaceous and ligneous), including a wide-range of pre-treatments adapted to the different biomasses and conversion processes, which have the capacity to develop the production process of a wide range of 2nd generation biofuels, and operate in a continuous way throughout long-term testing, simulating the industrial conditions, so that the result obtained and the developments carried out can be extrapolated on an industrial scale.

The main services carried out at the CB2G are: